The Howells-Dodge FCCLA Chapter met on Monday, November 15 at 7:00 p.m. at the high school.  President Brady Lund called the meeting to order following the opening ceremony.  Abbey Pieper gave the treasurer’s report.  During old business, members were thanked for their participation in the District Leadership Conference and for their great job of selling for the FCCLA Food Sales Fundraiser.  District FCCLA STAR Events are Wed., January 26, 2022 in Leigh and members were encouraged to start working on their events.

New business included selecting Thursday, November 18 as the date for the chapter’s follow-up seat belt survey.  The FCCLA Christmas Party is set for Sunday, December 5 at 7:00 p.m. with the juniors providing snacks.  FCCLA has the Concession Stand for the Howells-Dodge Wrestling Tourney on Saturday, December 4.  Members also were asked to sign up to help with the Winter Festival in Dodge in the morning of December 4 and in the evening from 5:30 - 8:00 p.m.  The FCCLA Babysitting Service will be held on Saturday, December 11 from 8:00 - 4:00 p.m.  Members were reminded about applications for the State Peer Education Team or State Officer Team.  FCCLA scholarships are available for seniors at www.nebraskafccla.org.  Plans were made for a Food Drive Competition between the high school classes.  The drive will begin on Monday, November 29 and continue until December 13.  The class who brings in the greatest number of non-perishable food items will win an ice cream sundae party.  The meeting was adjourned.  Door prizes were presented by Lilly Praest to Rylan Nelson, Aiden Meyer and Abbey Pieper.  Snacks were provided following the meeting. 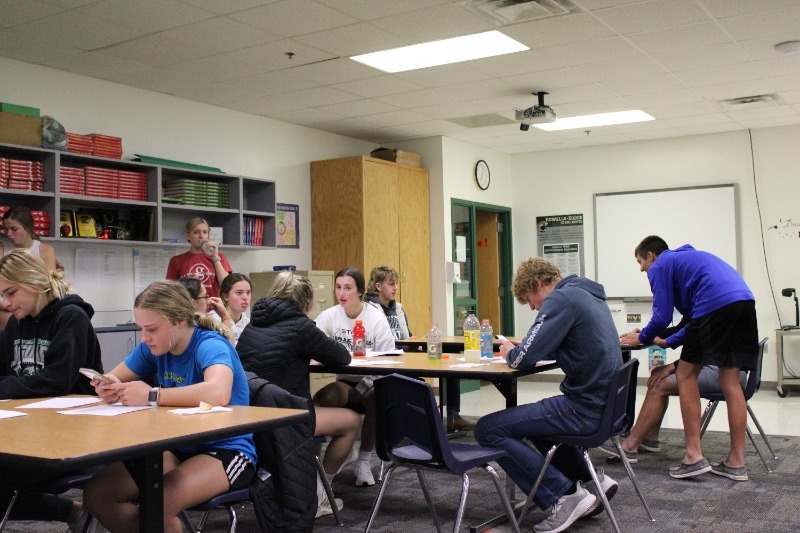