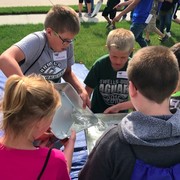 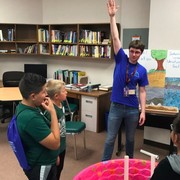 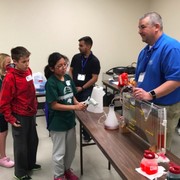 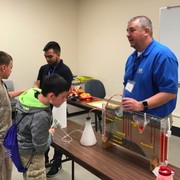 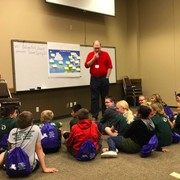 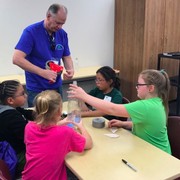 The 4th and 5th graders of Howells-Dodge Consolidated attended the Nebraska Children’s Groundwater Festival in Grand Island on Tuesday, May 9. They were accompanied by their teachers, Mrs. Kelly Throener and Mrs. Brenda Hegemann. The students each wrote about one of the sessions they attended.

The Water Treatment Game Show was a great learning experience for us 4th and 5th grade students. It taught us about the different processes that water goes through before we can use it.

The first process that water goes through is called filtration. In this process, the large pieces of debris in the water get sorted out. Also during this process, many water treatment plants add chlorine to stop bacteria and other life forms from growing.

The next step is called coagulation. In this process, alum is added to the water to gather any debris in the water. The alum makes the debris stick together. The leftover pieces are then called sludge.

Next, the process goes to sedimentation. In this process, the water is put into pools the size of a regular swimming pool.

Next, the water goes through filtration again. Sand can be used as a filter, but not at a water treatment plant.

Finally, chlorine is added to the water to kill and bacteria or viruses.

We played a game show with questions about things we learned.

That’s what we learned at the Water Treatment Game Show.

In this activity, we learned how groundwater gets to our wells. The presenters used a model to explain how the water gets to our wells and how pollution can damage our water supply. We also used water with food coloring so we could see how it travels. We learned about water from lakes and a point source. They used a hand pump to pull the water through the gravel and rocks in the model. We also learned about pollution. If anything hazardous gets into our wells and we pump it out to use, we could get sick. We then got to pump the water with the hand pump. It was fun because if you answered a question and got it right, you would get a piece of candy.

We learned that there are 20 wells in Grand Island’s well field.

Did you know that there are wells in smaller towns and in big towns? Most towns have water towers. We also learned what water towers do and what wells do.

We learned how to build water rockets. We were split into four different teams. We started with an empty 2 liter bottle. Then we put the circular part on the bottom where the top is at. We made a paper cone that we attached to the rocket. Then we put wooden wings on the rocket. The best part was when we got to launch our rockets. Then we ran after our rockets so we could bring them back to school.

The Drought Run About was an activity about water traveling from the Pacific Ocean to Nebraska. We learned how to work together and take our time. The teams were 4th graders against 5th graders.

Filtration: It was a battle between two teams. First, we had to answer a question about water. Then, we would add a PVC pipe to the one that was already there. Next, you would add sand, then answer another question, and if you got it correct, they would add water. At the end you would want the cleanest water and if you did, you would win two tootsie rolls, and if you lost, you would get one.

Catch and Release: In this activity, there were teams. We had a pool and a wooden fishing rod with a magnet at the end. We would try to catch fake fish made out of paper that had a paperclip on it. We would bring it up, and it would have a question with a number on it. The people running it would know where to look for the answer, and if you got it correct, you would get to keep the fish, but if you got it wrong, you had to throw it back. At the end whoever had the most fish won.

Toss the rock: In this activity, there were two teams. First, you would toss the rock back and forth to your partner. They would play music and when the music stopped, whoever had the rock would get to choose a category. If you answered the question right, you would get one tootsie roll, and if you got it wrong, you got nothing.

This article is about the water cycle. Larry Potter kept us interested by walking us through the water cycle with a boy in the 4th grade class named Ryon. He said that Ryon was a water droplet. Ryon had a party in a cloud with Cream Soda and cookies and cream Hershey bars. When he ate too much, it rained (precipitation). Then he fell into the mountains and turned into a snowflake.

Months passed by and he started to melt and dripped into a river or he could have went into a tree’s roots. Then he evaporated and became big enough that he became a cloud, and it started all over again.

We learned about three different kinds of birds: a Merlin Falcon, a Barn     Owl, and a Peregrine Falcon. This was one of our favorite sessions.

Nimbus, a Barn Owl, is a bird that they show because if they showed a Barn Owl that was born in the wild, it would get too nervous. That is why Nimbus was born and raised in captivity. Features of the Barn Owl include a flat face, silent wings, and a heart shaped outline on its face.  It can move its head ¾ of the way around because its eyes are not able to move.

Calypso, a Peregrine Falcon, came to Raptor Recovery with a broken wing.  A Peregrine Falcon is the fastest bird in the world. Calypso was unable to be released into the wild and that is why she is now in shows.