2012-2013 Howells-Dodge-Clarkson Officers with the awards the chapter received from Keep Nebraska Beautiful.

It was announced that the chapter received the 1st Place Youth Group/School Award and the 3rd Pace Recycling Award from Keep Nebraska Beautiful, along with $150.  The chapter was also named the national runner-up of the National Organization for Youth Safety Youth Turn-It-Around Award.  The chapter was awarded $1000 for projects done in the past year.  Chapter officers are invited to attend the Fall Leadership Workshop on Monday, September 10 at UNL in Lincoln.  The group will leave at 7:30 a.m. and return by the end of the school day.  Chapter t-shirts were discussed and members were encouraged to submit design ideas by September 5.  The chapter will have the concession stand for the Howells-Dodge/Allen football game on Friday, August 31. The chapter will be doing free face painting for children on Saturday, September 8 for the Barbeque and Brew at the Howells Ballroom from 4:30 - 7:00 p.m.  Fall Adopt-A-Highway Clean-up will be held on Monday, September 10 at 7:00 p.m.  FCCLA dues are $13 per member and are due on September 14 to Jody in the office at Howells-Dodge or to Kim in the office at Clarkson.  Chapter parents for 2012-2013 are Jane and Russ Sayers, Brenda and Dave Hegemann, Kent and Mary Smith, Cheryl Langdon, Jody Podany and Patty Reick.

Goals and projects for the year were discussed.  District 5 Leadership Conference is Tuesday, October 16 at CCC in Columbus.  Howells-Dodge-Clarkson is in charge of the bucket auction.  Each chapter can have three entries in the Creed Speaking Contest.  A poster contest will also be held.  The opportunity to be a State Officer Candidate was also discussed.

The chapter's annual frozen food fundraiser will begin later in September.  District STAR Events will be held on Wednesday, January 23 at Newman Grove.   The meeting was adjourned and door prizes were given by Amanda Evert, Recreation Chairperson. 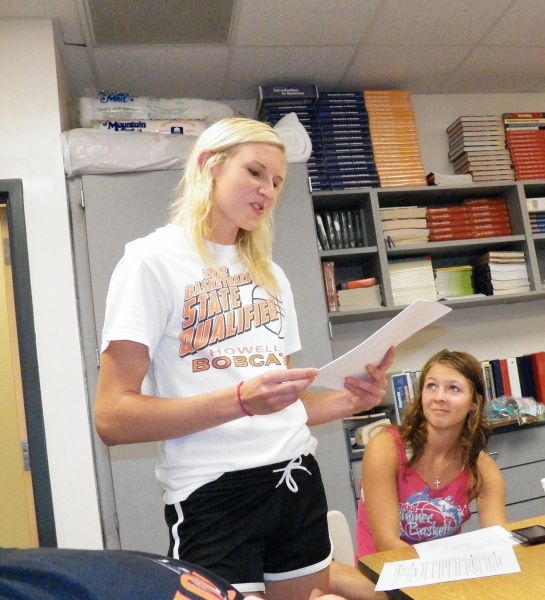