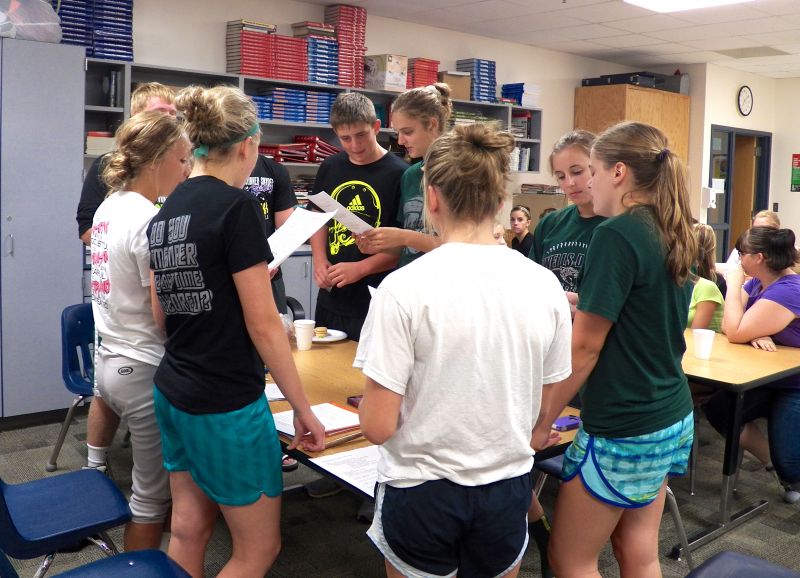 The Howells-Dodge FCCLA Chapter met on August 27 at 7:00 p.m. at Howells-Dodge Consolidated School.  A spaghetti supper was served before the meeting.  The opening ceremony was led by the officers.  The 2013-2014 officers were introduced.  They are:  President – Amanda Evert, Vice President – Jill Rocheford, Secretary – Danny Widhelm, Treasurer – Emily Brichacek, Historian – Leah Grovijohn, Publicity Chairperson – Darren Hegemann, Power of One Chairperson – Morgan Baumert, and Recreation Chairperson – Casey Wisnieski,  New members were welcomed.  The chapter was congratulated for receiving the 1st Place Youth Group/School Award and the 2nd Place Recycling award from Keep Nebraska Beautiful.  The FCCLA Officers will be attending the Fall Leadership Workshop on Wed., Sept. 11 in Norfolk.   They will leave at 8:00 a.m. and return by the end of the school day.  The FCCLA Frozen Food fundraiser will begin later in September and delivery will be on November 2.  Each chapter in District 5 will be getting different color shirts to wear at District Leadership Conference and as chapter shirts.  Howells-Dodge shirts will be green.  The chapter will be doing Face Painting at the Howells Ribfest on Saturday, Sept. 7.  Members will be supervising the inflatables for the George Blum Family Benefit on Saturday, Sept. 14.  Adopt-A-Highway Clean-up will be held on Tuesday, Sept. 3 at 7:00 p.m.  State and National FCCLA dues are $13 per member.  Pay dues by September 16 to Jody in the office.  Chapter Parents for the year are Bob and Cindy Evert, Dale and Mary Jo Brichacek and Darryl and Deb Hegemann.  The chapter discussed projects for the year.

District Leadership Conference will be on Monday, October 21 at CCC in Columbus and all members will attend.  The theme is “Power Up With FCCLA.”   Members were asked to volunteer for the Creed Speaking Contest , the  poster contest, and State Officer Candidate.